The cultivar was selected from a wild population which grow on the natural site on loess soil at village  Przybyslawice near Sandomierz.

ULEKO Thuringian Mallow (Malvaceae family) is a perennial crop to grow up .1600-2600. mm height. Plants have many (6-20) very stiff and strait standing stems. Leaves are large, on the basal part of stem 70 mm or longer, the upper ones shorter. Lower leaves blades consisted of 5 flaps, the upper ones are  3-flap, and usually the middle flap is the longest. Leaves, mostly on  its lower side, as well as the middle and upper internodes of stems are covered with thick hairs. At the leave base from  nodes of stem grow single 5-patch flowers. But the top of each stem is terminated by a raceme inflorescence. The flower crown consisted  of coalescent 5 petals, which are 3-fold shorter than corolla petals. Flower petals are 30-40 mm long, are pink with intensive rose veins. The schizocarp fruits  contains about 20 seeds in each. Seeds are of kidney shape, bare, smooth, dark brown or gray, achieving 3,5 g TKW. The genome contains 42 chromosomes. 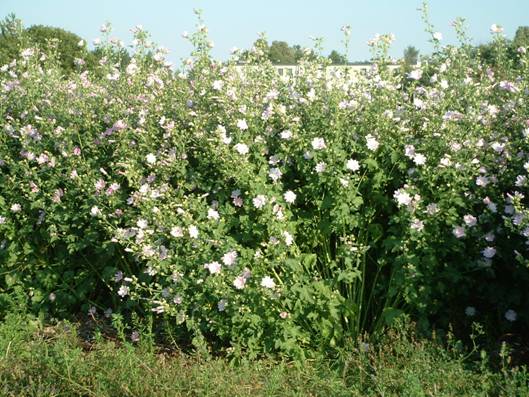 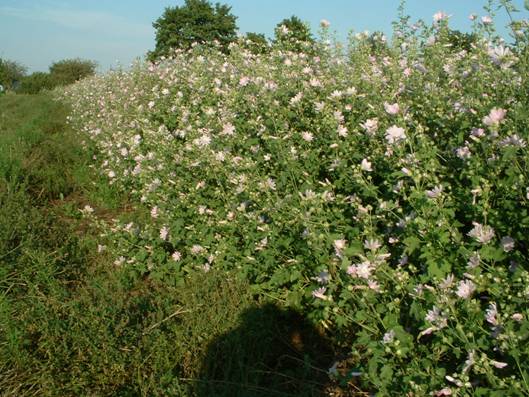 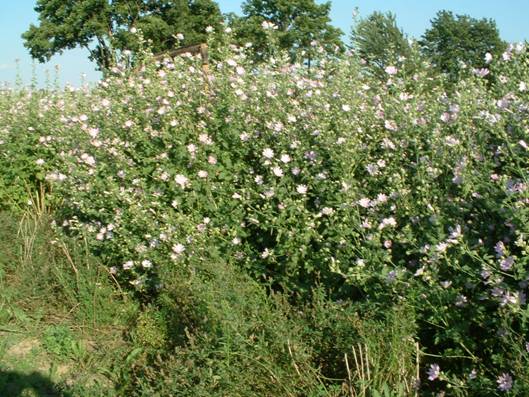 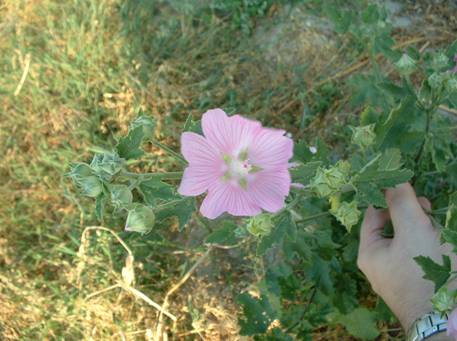 In the period following spring swing plants grow up by about 50%  lower , but usually produce flowers and seeds in the firs year of vegetation.  They flower in late summer  and set seeds in  early fall. In subsequent years of vegetation  shoot buds start to grow in early spring, but intensive growth starts in May and lasts until the end of flowering phase. The period of flowering is long: from mid June to September, but the most intensive  flowering  is in July and August. Attractive nectar of ULEKO lures many honey bees to gather rich nectar and pollinate flowers. Thuringian  Mallow is the  autogamous species so each flower produces a fruit. 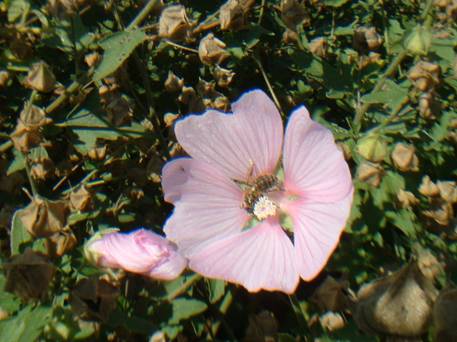 Fig. 5. Numerous pollen-sticks fused in a tube surrounded a pistil. 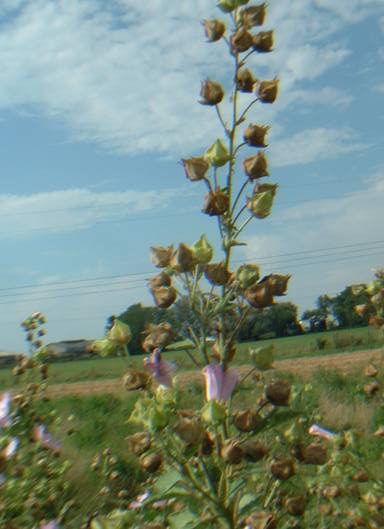 Fig. 7. A raceme is formed on the top of each stem and each flower produces a fruit. 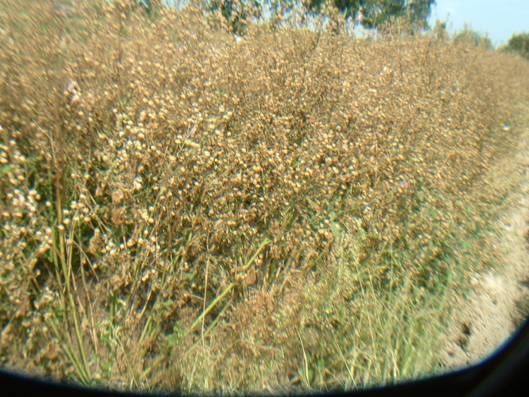 Fig. 8. A single plant produces many hundred fruits which contain a lot of seeds. 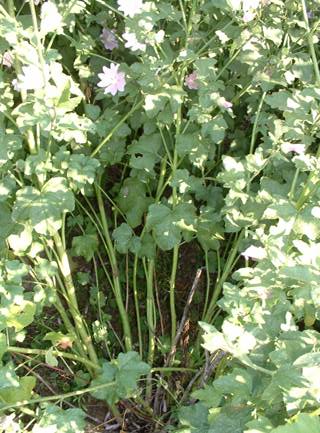 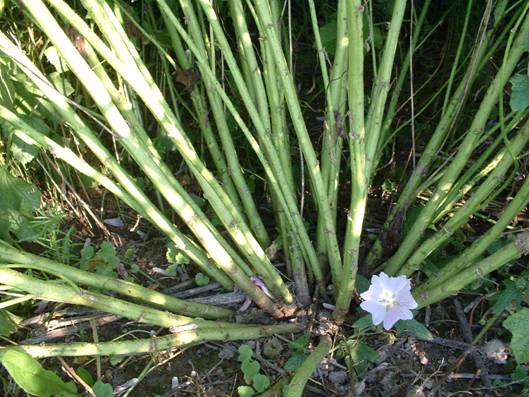 Fig. 10. Rigid and thick woody stems  no subjected to lodging. 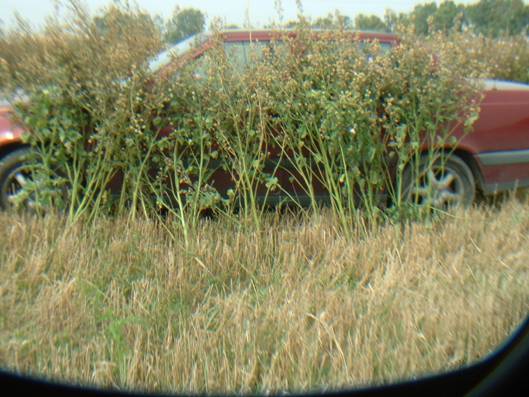 Fig. 11. More then 20 stems grew from a single seed in the second year of vegetation.

Plants in the second and subsequent years of vegetation develop a thick, short root-carp from which leave numerous, thick, white, fleshy roots which are covered with light gray skin. Early spring or after cutting the number of crown-stems grow strongly first-order branching. Roots and aboveground parts of plants contain 6-8%  mucilage, similar to related species of Althea.

Schizocarp of Mallow ULEKO mature relatively evenly. Seeds should be collected at the stage of adolescence, when most of the fruits are yellow, the flower crowns are little  yellowing and begin to wither, and the seeds take on the brownish color. Not completely dried brownish seeds germinate better than overripe, black and  hard  seeds. At this stage the seeds are wrapped and kept well in the flower crowns, so that avoid seeds to shed.  Overripe fruits containing dry black seeds can  brake easily and shed out seeds. In consequence, when seed harvest is delayed the yield is diminished. Anyway it can help on fallow  land if plants are not cut there. It is beneficial in the natural fields, because volunteer plants can renew the sward there, which may persist decades. 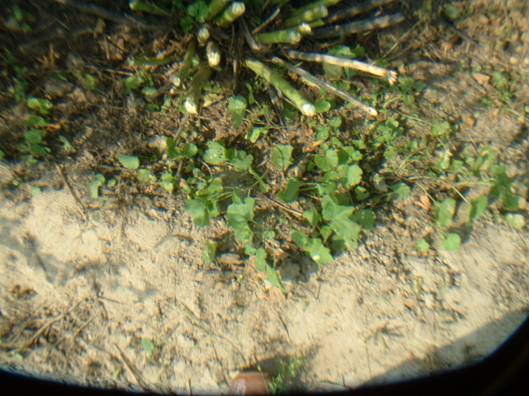 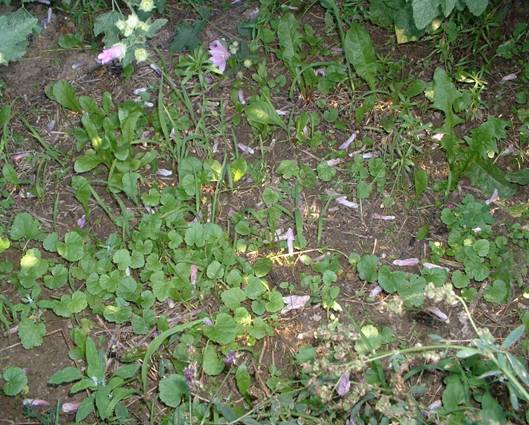 Fig. 13. Volunteer plants  may assist in the rejuvenation of the plantation. 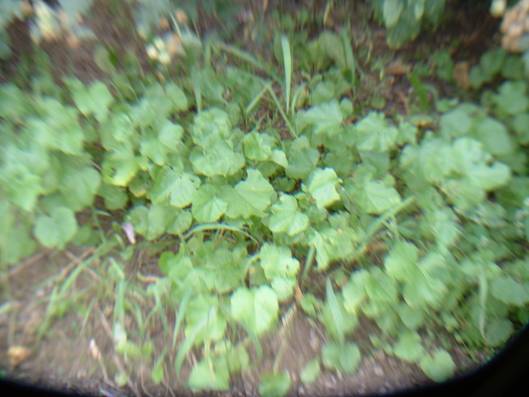 Fig. 14. Plants grew from seeds shed in Summer are already big in Fall.

Ways to use ULEKO cultivar.

The cultivar is a perennial persistent crop. Honey bees are supplying with nectar from late June to early August, even in conditions of dry weather since it has nectar cubes sheltered . In terms of  honey production is comparable with a  buckwheat, giving ca 150-200 kg/ha. Honey of  ULEKO  Mallow is characterized by exquisite floral fragrance, mild flavor and is very sweet. Fresh honey is nearly colorless with yellow-green tint, and easily crystallizes  assuming white. It corresponds to the requirements of Polish national standard for bee-honey : ‘Miód pszczeli PN-88/A-77626’. The period of usefulness for the bees may be extended to September by moving a part of plantation, so that the second growth  blossom 5-6 weeks latter than the first one.

The cultivar is suitable for the establishment of plantations for the production of biomass. Its thick and rigid stems protect canopy against lodging, that provides a stable yield. Depending on soil quality and fertilization, can be obtained dry matter yield 12-25 t/ha.  Two cut system enable to harvest a  higher yield. An advantage of ULEKO is the low cost of installation because the quantity of  seed required for sowing is ca 6 kg/ha, insomuch seed production is very efficient. This is remarkable  advantage comparatively to many other energy crops  requiring vegetative propagation. The biomass of ULEKO in terms of chemical composition is similar to the wood of trees, and the content of ash (6.5-7%) is similar to cereal straw. 1000 g of ULEKO dry matter usually  supply with  ca 15000 kJ.

ULEKO cv. plants exhibit characteristics predisposing the cultivar  to sow fallow lands, wastelands and deactivation of set-aside soils. It tolerate seasons with dry conditions. The cultivar is  characterized by a perfect persistence  over long years of use, well promoted and quickly grows which creates a compact, high canopy which suffocates the plants of  weeds. It has a deep root system strengthening a soil pile. Valuable  feature is auto-gamy   providing high seed yield 0.5 t/ha or more. It is suitable to cover and protect against erosion road banks, coal mining dumps, and also  has ornamental  quality.

Mallow ULEKO can serve to the other purposes as following:

-         the raw material for cellulose-paper industry, since the wood from Mallow is  similar in quality to wide-leaf-trees wood;

-         the source of mucus for pharmaceutical purpose, since the contents of arabinose and ramnose is high,  comparatively to cultivars belonging to Malvaceae;

-         a fodder for ruminants – it contains much digest protein and sugars in green matter.